Age of Consent Laws in Arizona 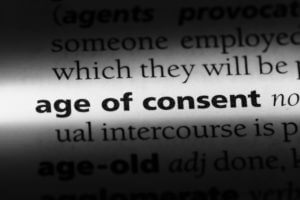 In general, however, the idea is that if you have sex or a sexual contact with someone younger than the age of consent – then you have committed “statutory rape.” That is, rape by law, even if the person is “willing.” Note that the phrase “statutory rape” is not actually contained within Arizona law. This is just a form of legal slang to describe sex that is prohibited by law and not because the person engaging in it didn’t want to.

This article will focus solely on Arizona law. In Arizona, there are many different sex crimes that can be charged. These crimes focus on different ages, different forms of sexual contact, and different circumstances – such as whether the adult is considered to be “in a position of trust.”

The different types of contact are defined in Arizona law at A.R.S. Section 13-1401. These are legal definitions and are not necessarily what you would think of from a real-world perspective.

There are many sex crimes in Arizona that have an age component—ranging from an adult and teenager having sex, to crimes like child pornography, molestation of a child, and child sex trafficking. However, “Age of Consent” or “statutory rape” typically refers to a teenager and adult having consensual sex; however, because the minor is under the “age of consent,” the act is considered statutory rape. In other words, this article will not deal with other sex crimes that involve children, such as child pornography, etc.

This criminal charge involves “sexual contact” with anyone who is 15, 16, or 17 without consent or with a person who is under 15 if the sexual contact only involves the breast. This is a bit confusing as the crime can turn on whether the 15, 16, or 17 years old is willing – despite the fact that they are under 18. Note, however, that pursuant to subsection B of this statute, the adult CANNOT use the defense of consent if they are in “a position of trust.”

A position of trust is defined in Arizona law at ARS 13-1401. It includes the minor’s parent, step-parent, adoptive parent, foster parent, legal guardian, teacher, coach or instructor (whether volunteer or paid), clergy, priest, or anyone engaged in a romantic or sexual relationship with the minor’s parent, adoptive parent, legal guardian, foster parent or step-parent.

This criminal charge involves the activities of “sexual intercourse” and “oral sexual contact.” Note, this DOES NOT cover “sexual contacts,” as defined above. If an adult and a minor have consensual sex, this is the likely charge the adult will face. It is also known as simply “Sex Conduct” or “Sex Con” amongst lawyers, police, and judges.

The statute simply makes it illegal for anyone to have “sexual intercourse” or “oral sexual contact” with anyone that’s under 18. However, the punishment faced will vary widely depending on the underage person’s age and whether the adult was in a “position of trust” or not (see above). If you are an adult and you have sex with a teenage minor, in Arizona, this is the crime that you are most likely to be charged with.

Punishments for Sex Conduct with a Minor

Arizona law provides for several defenses to sex abuse and sexual conduct. Such as:

Medical Practice – Actions that are done “in furtherance of a lawful medical practice” are not considered to fall under the sex abuse or sex con statutes.

For example, a 20-year-old female meets a male who says that he’s 18. But, in fact, he’s 17. They have sex. Whether the woman can use the mistaken-age defense will turn on whether she could have reasonably known his age. Did she take reasonable steps to figure out his true age? If yes, then she may be able to use this defense. Simply not knowing the true age, alone, is not enough. And what is meant by “reasonably known?” That is up to a jury to decide.

Good Samaritan – If a person is 1) rendering emergency services, 2) at the scene of an emergency, and 3) it is a recognized and lawful form of treatment; that is 4) reasonably adapted to promote the health of the person; and 5) the person rendering aid REASONABLY believed that no one competent could be consulted and that 6) a REASONABLE person would consent – then they may use this as a defense to allegations of sex abuse or sex con.

Marriage – If the minor is the spouse of the adult, then it is not sexual abuse or sexual conduct with a minor. Note, forced rape (known as “sexual assault” in Arizona) is still illegal, even if the victim and perpetrator are married.

Age of Perpetrator – i.e., “The Romeo and Juliette Defense.”

This is to protect young couples from having one person prosecuted just because they hit their 18th birthday before the other person. However, there are very specific requirements to use this defense.

Second, the adult must either be A) 19 years or younger; or B) attending High School.

Third, the adult can be no more than 24 months older than the minor. So, for example, imagine Billy is 19.5 years old – but he is in high school (see the 2nd requirement). Then the Romeo and Juliette defense can be applied if his girlfriend is 17.5 or older (2 years apart).

Fourth, the sexual activity must be consensual. That is, forced rape (i.e., “sex assault”) is still illegal, even if the above 3 conditions are met.

There are many ways to defend against criminal accusations besides the ones listed in the statute. These often turn on challenging the State’s evidence. This can range from legal arguments – like evidence obtained from an illegal search must be suppressed; to factual arguments – e.g., the minor is lying, sex never happened, the wrong person has been accused, etc.

Challenges can be made to the witness statements, forensic evidence, and anything else used to “prove” guilt. The various challenges to criminal law are too varied and case-specific to describe in this article. In fact, one can spend their entire lifetime studying these various defenses – and some do. i.e., criminal defense attorneys!

What To Do If Accused of Statutory Rape?

First, do not discuss the case with anyone who is not your attorney. Second, hire a good attorney! And fast. Sex crimes are very complex and can turn on the smallest detail. It is imperative that you hire counsel to begin working on your behalf immediately.

At DM Cantor, we can even begin working on your case before the State has even filed an indictment or an arrest has been made. In other words, if you even think that someone is making allegations of sexual abuse, sexual conduct, or any other crime – against you – you should seriously consider hiring an excellent legal team fast. The consequences of such allegations can be life-ruining and time is of the essence.

Again, do not discuss your case with anyone other than a licensed attorney that you are consulting with or whom you’ve hired to represent you.